HISTORY AND GENERAL INFORMATION OF EDİRNE

Edirne is a historical city and has preserved its importance and value throughout history. It is known that Edirne was founded by the Thracians who migrated from Central Asia and settled here in ancient times. Later, Alexander the Great included these places within the vast borders of the Macedonian Empire. Later, these lands, which were dominated by the Romans, fell to the share of Eastern Byzantium with the division of the Roman Empire into two in 395.

The city, which was rebuilt as if it was re-established by Hadrianus II, one of the Roman Emperors, was named after him (Hadrianapolis). In 586, the Avar Turks besieged this place, but they returned without being able to take it. Bulgarian Turks succeeded in seizing the city in 914. This city, which later passed back to Byzantium and was besieged for the second time by the Pecheneg Turks in 1050 and 1078, was finally conquered by Sultan Murat I in 1361 and became the throne (chief) city of the Ottoman Empire and was a capital city for 92 years until Istanbul was conquered in 1453. (capital) remained. During these years, it experienced the most glorious days of its history.

Edirne was a province under the name of “Pasha Sanjak” under the rule of Rumeli Beylerbey during the Ottoman Empire. The headquarters of the Beylerbeylik was located in Sofia. Edirne was known as the university city of the empire. XVII. The city, which became one of the few largest cities in the world in the XVIII century. century entered a period of decline. Two great fires in 1745 and 1751 destroyed Edirne to a large extent. On August 22, 1829, when the Russians entered the city and stayed for a few months, Edirne was the first invasion disaster. Edirne was again the scene of 13 months of occupation by the Russians on January 20, 1887, by the Bulgarians on March 26, 1913 for four months, and by the Greeks for two years in the 1920s. Today, the city of Edirne, which has the border gates of our country opening to Europe by road, was liberated from the enemy occupation on November 25, 1922.

Edirne is in the northwest of our country and is located between 41 40 north parallel and 26 34 east meridians. It is surrounded by the Istranca Mountains in the north, the Ergene Basin in the middle, mountains and plateaus and the Meriç Delta in the south.

The largest of the rivers in Edirne is the Meriç River. The length of the river, which forms a border with Greece, is 187 kilometers along the Turkish territory and the border. The part of the Karaağaç triangle that passes through the Turkish territory is approximately 13 kilometers. Apart from the Meriç river in Edirne, the Tunca, Arda and Ergene rivers are located. Of these, 12 kilometers of the Tundzha River, which has a total length of 56 kilometers, forms the border with Bulgaria.

A dark continental climate prevails in Edirne. Winter months are very cold and long, while summer months are hot. It rains the most in the spring. The annual precipitation average is 452.95 kg/m2. The hottest months are July and August. The coldest months are January and February.

Edirne was an important educational and cultural center during the Ottoman Empire. In the Republican era, Edirne showed a rapid development in education, and currently the literacy rate has reached 99% in recent years. There is no village without a school in Edirne. Apart from one university, there are 180 primary schools, 20 high schools, 15 vocational high schools and equivalent schools, 3 private schools, 2 private kindergartens and 94 pre-school kindergartens in the city.
Culture & Tourism
Edirne also has a rich culture due to its location connecting Anatolia to Europe. There are 612 historical artifacts reflecting the Ottoman Turkish culture throughout the province. Some of these works (which are Selimiye Mosque, Üç Şerefeli Mosque, Caravanserai, Meriç Bridge, Old Mosque, etc.) are still intact and are still in use. A similar historical building is also being restored. In addition, there are 29 protected areas throughout the province. 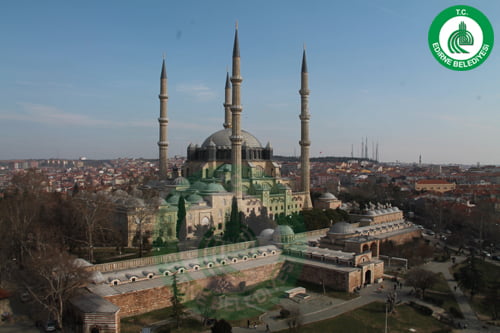